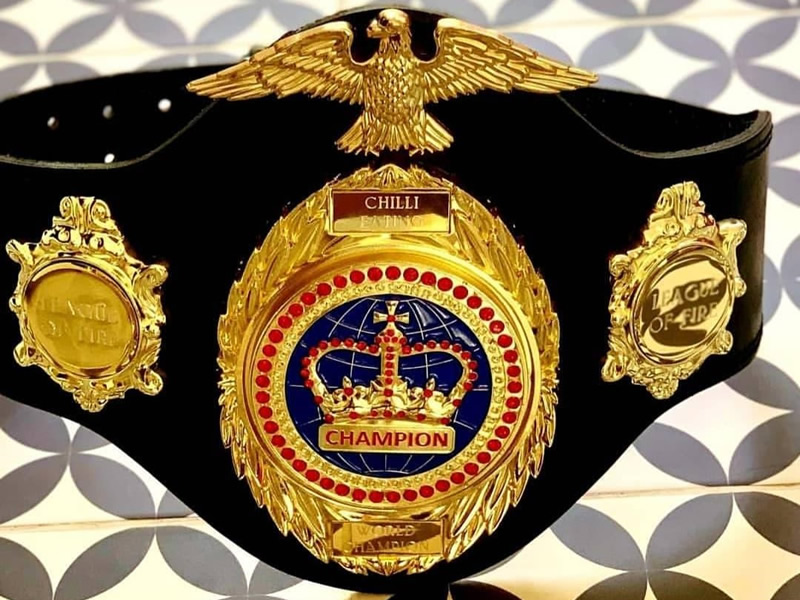 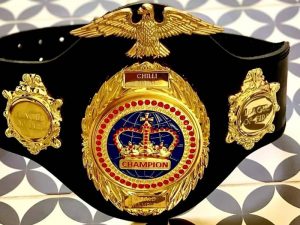 When we were busy creating the League Of Fire, it became apparent that we needed a World Title Belt. We wanted one World Champion! And this article is dedicated to our belt, ‘The Bird’, as it is affectionately known at the League Of Fire HQ! Yes, that is right, we decided to include the big majestic bird at the top of the belt as a symbol to represent our Champion. As some of you may know, birds are immune to capsaicin and can eat any pepper fed to them without feeling a hint of pain! We thought this was a very apt creature to grace our belt and represent the number one chilli-eater on the planet! 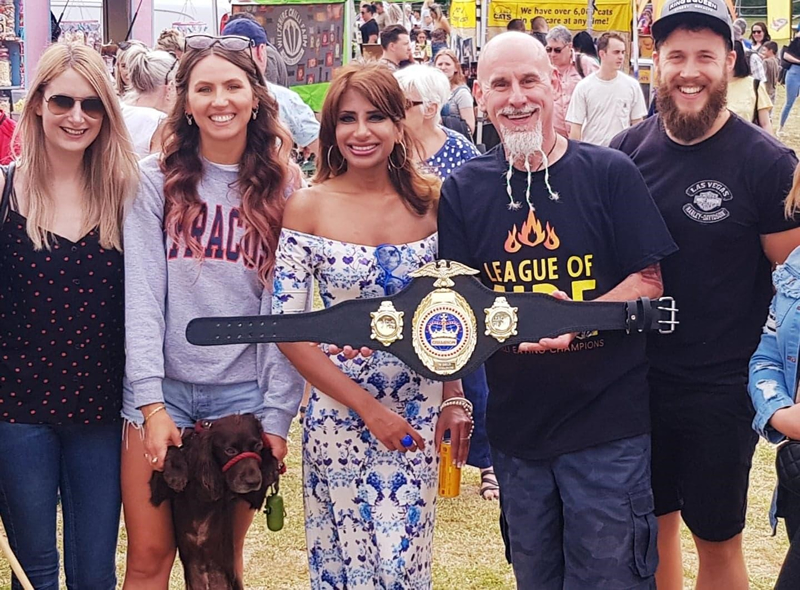 UK Chilli Queen & Johnny Scoville with ‘The Bird’ prior to their battle at Guildford, UK, on 21st July 2019

Actually, that is not entirely true, on this very special occasion, a first ever World Title match, the League Of Fire co-creator ‘Moruga’ Matt Tangent did actually sit in between the two competitors and also took part, a cheerful cameo appearance and a great gesture; the League Of Fire co-founder sitting in between two hard-core chilli-eaters and testing himself against them, truly putting himself in the firing line! 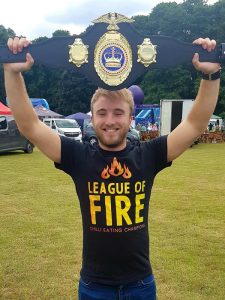 Kieran Murrell of Chilli Pepper Pete’s with ‘The Bird’ prior to the first ever L.O.F. belt match at Guildford

The two competitors needed no introduction to most people in the chilli community. The UK Chilli Queen Shahina Waseem had won over 60 competitions at the time of the match. There was no better person to participate in the first ever Title Match and potentially become the World Champion and proud owner of the Bird! She is incredible and has won more officiated chilli-eating contests than any other person known to man. So who should compete against her? There were a few worthy challengers and we decided the most exciting prospect was the one and only Johnny Scoville. Johnny is a different type of chilli-head, less of a competitive eater, but typically can enjoy a Reaper or two for breakfast without a flinch. Also, some of the incredible challenges he has done on his YouTube channel were much more brutal than any regular chilli-eating contest! By flying him over from the USA, we managed to create a very friendly but very serious international rivalry. This was not just two champions going head-to-head to become the ultimate champion and owner of the ‘Bird’, but this was now the UK vs the USA!

To analyse and reflect on the actual battles is a story for another time, and don’t forget, you can see the footage of the first ever belt match, along with all our other L.O.F. matches on our YouTube channel.

Instead, we will take you on a tour that the Bird has been on since that historic first ever match on July 21st 2019 at Guildford. The UK Chilli Queen did emerge victorious and took the Bird all the way over to northern California, Sacramento for the big re-match which took place at Kupros Craft House! We felt that since Johnny came over to Shahina’s back yard for a match in the UK, then it seemed fair that the rematch should take place just a couple of hours from Johnny’s hometown of Reno. The venue was set: Kupros Craft House in downtown Sacramento, California!

That is the end of Part 1, keep checking out our blog to catch Part 2 coming soon…

BREAKING NEWS – The Next L.O.F. Belt Match Challengers Have Been Confirmed!