A few months ago, we released our first ‘Chatting To The Champion’ blog which focused on the official Oceania regional League Of Fire Belt holder Jesse Painter.

Jesse is like the Austin Powers of chilli, a man of mystery! So, what did we do, we asked his wife some questions about him so we can learn a bit more about the great man himself. If you missed Part One, you can read it >>here<< before continuing to read Part Two…

LOF: Hello again Chantal and thank you again for letting us know a bit more about our Oceania champ, your husband Jesse. We had just asked about Jesse’s first ever chilli eating contest, which was a brutal Spice Boys chilli popper competition. Obviously, his competitive chilli eating did not stop there…

Chantal: After that was the Fox ‘n’ Ferret, the Christchurch heat for NZ Championships! (Clint Mayer organises contests across the country with the winners taking a seat in the annual NZ Championships Final thereafter). Again, Jesse went to win, he wanted that spot in the Auckland final – badly!

That was a harder one, not the comp itself, but that it was on the tail end of our lockdown. The Spice Boys comp was Feb… March/April was our lockdown. I think it was June when the Christchurch heat got rescheduled and we found out two days before!

Jesse was keeping his tolerance up after the Spicy Boys popper comp in February for the Christchurch heat (the original date was beginning of April I think) and then when lockdown happened, it got cancelled! He kind of stopped prepping, I mean he was still eating chillies in food etc, he always eats chillies, but not to the same extent. He’d not really eaten chillies in a big way for about 12 weeks, he was just getting over a cold, it was a Thursday night, he left a note for his boss, ‘left early, gotta do my hair, catch ya tomorrow’ and off we went to that one!

He wanted that spot in the finals! It was a speed round to finish, he weirdly came out of it with blisters on his tongue, (the one and only time so far) but he got his spot in the final- so it was worth it!

LOF: How did Jesse feel going into Clint’s final in Auckland? That contest has such a fearsome reputation and is known around the world! 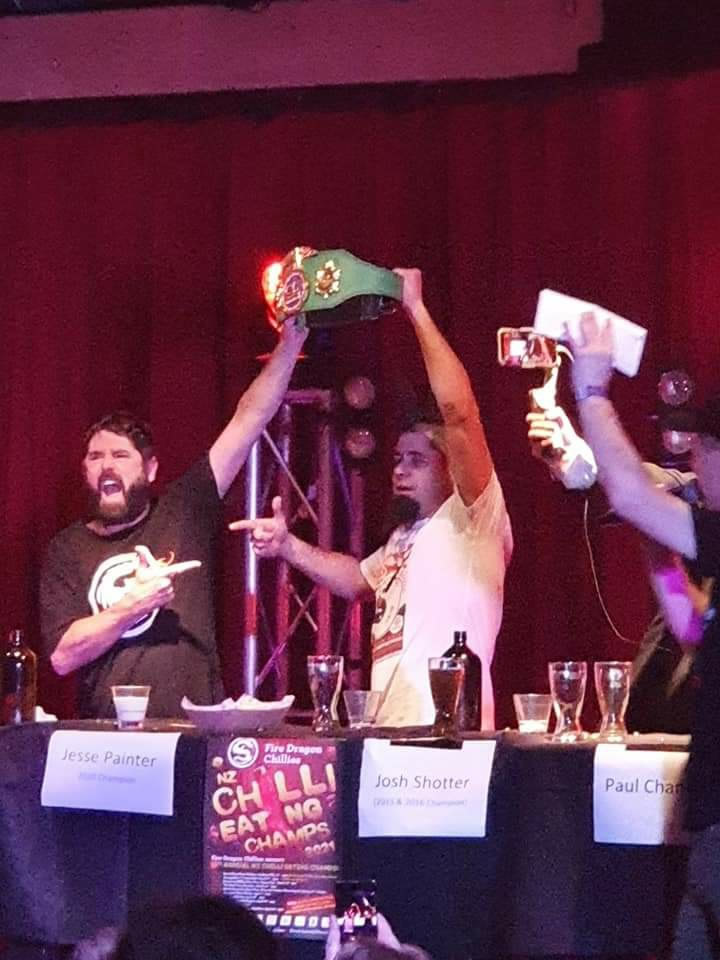 Chantal: Don’t get me wrong, he always backs himself, but he truly went into that one with the mind set of chucking his hat in the ring and seeing how he got on-not to say he wasn’t prepared to give it all he had. That win was also a little bittersweet. Yes, he won, yes he was the 2020 NZ Champ, but he felt odd about being called the champ and winning a final, without going up against the previous champion Justin Rummel (the 2019 winner).

Regarding the final this year (2021), Jesse was backing himself, he wanted that win, and to be the second person ever to win back-to-back.

And what a battle it was! He knew going in, from seeing some of the heats online that the 2021 finals were going to include some stiff competition, and that there was! This year’s win does have a different feel to it though. The battle itself was brutal and he felt he earned that title this year!

When people ask me if Jesse is competitive, I would have to say, well… Yes, but no also! He’s a chill kind of guy, but he backs himself. Though he is probably more determined than anyone else I know. So yeah, I suppose that’s a yes.

LOF: Did Jesse ever watch any other competitive chilli eaters on YouTube or in other competitions before deciding to give it a go? Did anybody inspire him?

Chantal: Haha short answer, no! Like barely at all. Definitely not before his first ever contest, the Spicy Boys popper competition.

We watched the 2019 NZ champs highlights clip I think before the Christchurch heat. Between that heat and the finals, we watched a competition UK Chilli Queen vs Johnny Scoville, and maybe one or two other videos. And maybe two or three V2 Chug videos before he did his own one.

Yes, he was totally inspired by Johnny Scoville! Jesse watched a news segment when Johnny Scoville was down here in NZ when Johnny was in the studio doing an interview eating Chocolate pods like candy mid conversation, Jesse was like holy f***! That’s insane!

By then Jesse was eating super hots at work to comprehend the heat and not comprehend how he fully talked through it without batting an eyelid. So, Johnny Scoville is his chilli inspiration. And Shahina UK Chilli Queen and Atomic Menace blow his mind!

LOF: It is great that Jesse appreciates those chilli community legends! Jesse strikes us as a pretty cool kinda guy, who isn’t really interested in social media and getting YouTube views etc.

Chantal: It has only been recently since the last Auckland finals that we’ve really started watching any YouTube videos and still we’ve barely scratched the surface. I’d still say well less than 50 in total, ever. Jesse really isn’t technology orientated, I mean this whole creating an email address, a YouTube account, and a LOF profile, well that’s something alright! Jesse has always prided himself on the fact that you can Google his name and not find him… Then he started eating chillies!

Clint Meyer suggested Jesse make a LOF profile after the first NZ Champs finals win. It took Jess until after the second finals to come to terms with making a YouTube account, haha, and actually get around to doing it!

We watched a couple of the LOF Reaper challenge videos before Jesse’s attempt, not that seeing someone else doing it helps much! I think everyone has their own style and way of doing it. After the reaper eating actually there was a conversation about ‘Hot Ones’;

“What do you mean what’s Hot Ones, surely you know Hot Ones?”.

No, no, straight up, there was no ‘Hot Ones’ under the rock Jesse has been living under! Haha!

In PART THREE of Chatting to the Champion we will get more thoughts from Chantal about what his nearest and dearest think about his chilli-eating exploits discover more about Jesse away from chilli-eating! Don’t miss it!

Chatting To The Champion! Part One