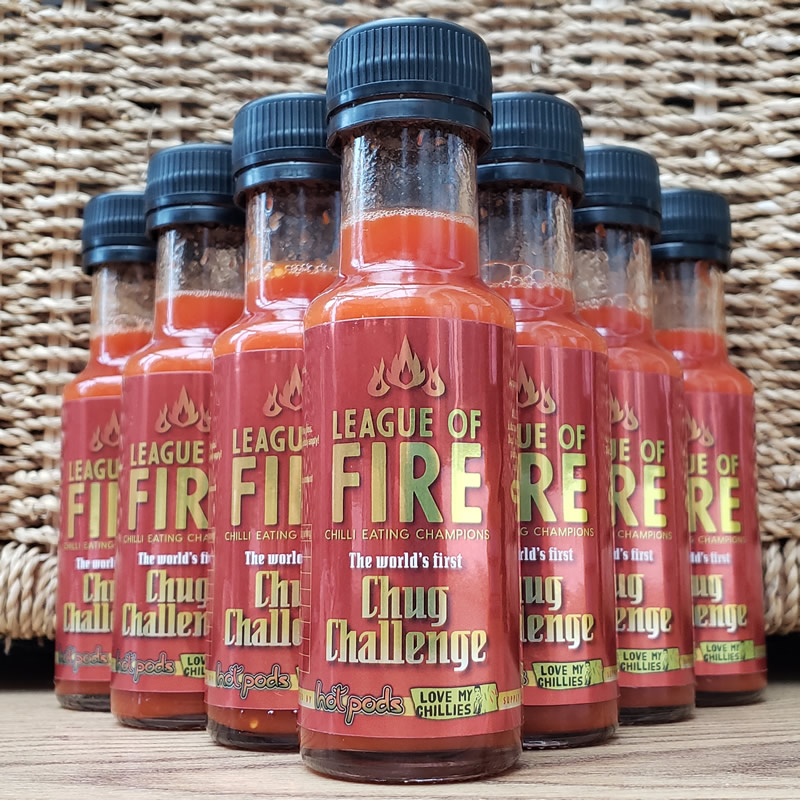 Just before Christmas of 2019 the League Of Fire released the world’s first ever hot sauce that was designed especially to ‘chug’! 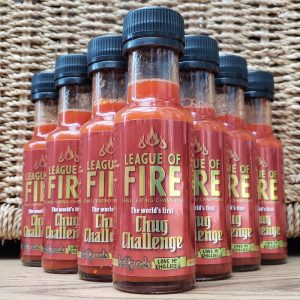 Made with fearsome Armageddon peppers and expertly created by Hot Pods Chilli Products in the UK, the challenge was a success and people all around the world were knocking back the 100ml bottle of pain and sharing their #chugface pictures!

Since then, we have released a 2nd and 3rd version of this challenge with different flavours and peppers which, hopefully, kept this idea of chugging hot sauce fun and exciting. The Official Chug Challenge v2 developed a cult status as being notoriously difficult, with the dreaded Chocolate Scorpion pepper causing all types of angst and despair, whilst the v3 appeared to be a little bit more cheerful, with White Bhut Jolokia peppers generating a slightly less threatening endeavour!

It is this concept of doing our very best to keep the Official Chug Challenge fun and exciting that led us to decide upon limited quantities of each version of the challenge. The Chugs are produced in small batches by Hot Pods Chilli Products, and the first ever Chug was something of a new idea. Consequently, we decided to produce a small run of the product, with Hot Pods cooking ONLY ONE expertly made batch.

After the success of the Chug, for versions two and three we decided to generate two batches, so double the amount of both of those Chug Challenges were produced. We at the League Of Fire understand that if something is marketed as ‘limited’ then it should in fact be limited!

Hence, we decided to re-release the first ever chug and order the second batch from our partners at Hot Pods, so this means that each chug challenge to date will have had two ‘runs’, ‘cooks’ or ‘batches’! Also, it means that all of you Chilli Heads who messaged us about this product and unfortunately missed out the first time around will now get a chance to try this legendary Armageddon Chug Challenge!

The League Of Fire will not be releasing any more of these products after they sell out, and that goes for the v2 and v3 Chug Challenges also. When we advertise a product as limited, we stick to our word.

Finally, we must say a huge thank you to Stu ‘Grandpa NEUK’ Walker and the NEUK Chilli Heads Facebook group for officially re-launching the Official Chug Challenge for us on Valentines day 2021! We hope you fall in love with the challenge! And don’t forget to share your #chugface pictures!