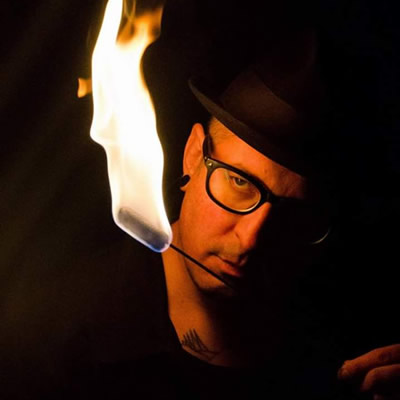 I am a fire, sideshow and escape artist with a love for chili pepper heat challenges and always strive to bring my unique StrangeOrDanger twist to challenges. For over a decade I have been wowing audiences with performances that have to be seen to be believed. While they say I am mere human, I bellow fire like a dragon and my skin appears impervious to its heat. I like to put audiences in touch with their dark side by bringing them inside the mystery of fire.

While a master of flame I also have other talents as a sideshow/variety act performer known as the “Innovator Of Insanity” who defies the brain and awakens the curiosity! As star and founding member of the StrangeOrDanger Thrillshow Multi-World Record Holder FenyxFyre has been sighted around the world! Recently featured on AMC Freakshow Season 2 along with several upcoming future appearances (including the Sideshow Of Psychosis # 0 Comic Book) and future world record attempts.

I welcome you to my world of StrangeOrDanger!

Check out these vids featuring Christopher