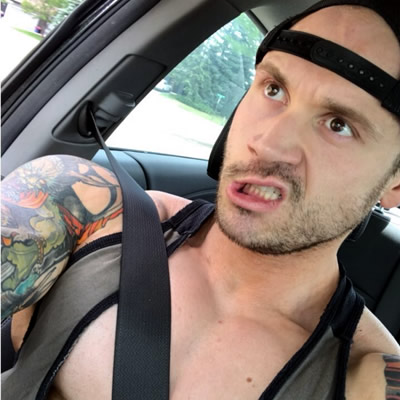 If you’re reading this you’ll have heard of Atomik Menace, Johnny ‘The Savage’ Scoville or Roger ‘Hot Dang’ Trier. All of whom have been jostling around the upper echelons of the world’s top Chilli Heads to knock the UK Chilli Queen of her perch.

Then, as 2020 drew to a close and a new year began, a new threat emerged from out of the blue. Actually, to be more precise, The Pyro Pitbull emerged out of the Great White North… Calgary, to be even more precise!

In this piece we will find out a bit more about James Kloepper – the man who obliterated the League Of Fire World Rankings and managed to get to the very TOP in a matter of months!

League Of Fire: James, have you always liked spicy food?

James Kloepper:  Absolutely no! I had never eaten anything spicy aside from honey hot wings and some hot sauce on tacos until the end of August 2020. I was always fascinated with how people could handle eating such extremely hot things. I watched Shahina (UK Chilli Queen), Dustin (Atomik Menace), Johnny (Scoville) and Roger (Hot Dang Show) on my YouTube many times.

I saw Johnny’s friend David Martin eating pods out of the blue one day and decided I was going to go for it! I bought some Jalapenos, I got home and ate one and it lit my mouth on fire! After a couple of hours, I went back to the store and bought something hotter, some Thai Chillies. I ate one and went close to panic mode, pacing around my kitchen, hahaha.

A couple of days after that, I went back to the store and bough some Habaneros! I didn’t find them to be a ton hotter than the Thai Chillies. Fresh super-hots aren’t available in my city really. So I Googled and found out where I could buy some dried Ghost Peppers. I was soon snacking on those for a couple of weeks. Once I saw David Martin eat a Tube Of Terror I figured I would try it. So I gave it a go. My only real goal was to eat a Tube, I was not planning on doing any other challenges, ever!

The morning after, having suffered cramps all night, I realised I wanted to do another challenge. My first Tube Of Terror was done on September 22nd 2020 and I have been doing challenges ever since!

LOF: So why did you decide to do so many challenges in such a short amount of time? We could never have imagined somebody would fly all the way to the top of the world rankings so quickly!

JK: The answer is simple. I am very competitive! I like to see how far I can push myself in anything I do. Whether it is bodybuilding or doing Tae Kwon Do as a kid (I received my black belt when I was 9 years old), I always see how far I can go. Eating chillies and doing League Of Fire challenges are a different type of hobby for me. It is really the only one where I endure pain and keep coming back for more. I suppose for me, I just like to see how far I can push my tolerance every time I do a challenge. As it’s not something I ever thought I’d achieve as even Frank’s Hot Sauce used to burn my mouth less than a year ago! It has almost become an enjoyable type of pain!

LOF: How does it feel knowing that some people put you inn the same class as Dustin, Shahina, Roger and Johnny et al.?

JK: It feels quite surreal and I don’t see myself being on their level. I like to push myself personally but I still think those four are miles ahead of me. I am glad I can inspire some people though, as that’s what they have done for me.

LOF: What does your family think about all of this?

JK: To put it simply they think I’m crazy hahaha. My mum and dad have genuine concerns for me doing challenges. They think I’m going to harm myself even though I reassure them that it is perfectly safe. My wife has now become less concerned with me doing challenges and really supports me. Most people can’t hear her in the background when I do my videos but a lot of the time when I say ‘I’m done’, she tells me to keep on going and don’t stop. So I really love her support.

My brother hahaha, now here’s something funny, my brother thinks it’s awesome! He doesn’t eat spicy things ever, really. However, he’s tried a few spicy things with me. He has eaten a few pods and a Paqui Chip. I think he has a naturally high tolerance because he ate a Chocolate Bhutlah with me and handled it better than most people I know who like spicy things! I’ve tried numerous times to get him involved in the hobby but he just doesn’t have the interest like I do. I think if he did he could potentially be one of the top Chilli Heads in the world with how he can handle the heat!

LOF: So this time next year it could be your own brother who knocks you off the top!

A massive 16M SHU of thanks to you James ‘The Pyro Pitbull’ Kloepper! Check out his amazing list of achievements by visiting his League Of Fire profile!