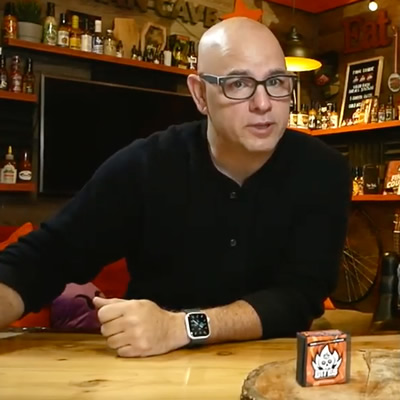 Today’s article focuses on Roger ‘Hot Dang Show’ Trier from Palantine, Chicago, USA. Prior to taking an in-depth look at Roger’s chilli credentials, let us remember why these brave chilli heads are gonna suffer for our entertainment on April 4th. They are hoping to raise money for the Australian wildlife that suffered from those atrocious fires in Australia earlier this year.

You can still donate >>HERE<<

Roger Trier has been a hugely influential character in the chilli community during the past year with his dynamic, professional YouTube videos which stand out for their amazing production values. But he is not adored solely because he is a professional video producer. He is an absolute fiend of a competitive chilli eater and zealously tackles any chilli challenge available to him.

Roger is another chilli head who shows his pain. It is evident for all to see and that endears him to his audience as we can relate to his sheer agony. We will see him eat his 20th, 25th or 30th Paqui chip thinking he could stop at any moment because of the arduous torture he is in, but still he will carry on until there are no more Paqui chips left to eat (he had 32 chips at his disposal and ate all of them… a world record for the Paqui Chip)! That was an incredible show of strength which gained his channel’s video over 3 million views and counting! Perhaps more impressive was the incredible 10 LOF Chugs in one sitting, made all the more impressive because he had the intimidating Atomik Menace and fearsome Scots Bonnet to compete against in a Triple Threat Chug! Roger has also decimated two Chugs back-to-back on another occasion, sits 2nd in the Nemesis League Table, devoured multiple Tubes of Terror, munched the MOAB, killed the Chili Cherry Nightmare and absolutely sped through the World’s Hottest Corn Chips Challenge! Suffice to say Roger has well and truly earned his place at this illustrious event!

It is not easy to identify a weakness in this great man! You will see him sweat, cry, drool and shake during the most challenging of challenges he undertakes but as you get to know him you begin to realise that he is more likely to collapse than quit! However, we still remember the time he did stop at 3 tubes when he actually had a 4th Tube ready and waiting to go! It seems crazy to think this now, but when Roger smashed 3 Tubes back-to-back just over a year ago, he did actually tap out instead of trying to push himself through that 4th Tube! After the third Tube he shakes the 4th Tube full of nuts around in front of the camera and says “I don’t think I’m gonna do this again… think I’ll put this (shaking the full Tube) somewhere, maybe I’ll give it away”!

LOF Prediction for the Spoonfuls of Terror Challenge: 8 Tubes

We know what you’re thinking… He previously tapped out after 3 Tubes back-to-back when he had the 4th Tube right in front of him! Well, we think Roger is a different animal now and his mental attitude has advanced. Much like Mike Jack and some other chilli heads, Roger will find the extra gear, no scrap that, Roger will hit TURBO mode with a big worldwide audience watching and the fact that this event is happening on his channel… The heat is ON! How could anybody forget that Triple Threat Chug Challenge when he just kept going and going and going and… Hopefully his lovely wife Analyn (loved and adored by Hot Dang Show fans) will not have to call an ambulance for him! It is this extreme determination that persuades us to believe that he will successfully complete a huge 8 Tubes but that 9th Tube may just be a nut too far!

What do you think? Please let us know in the comments!

The Spoonfuls of Terror Chilli Challenge – An Introduction!