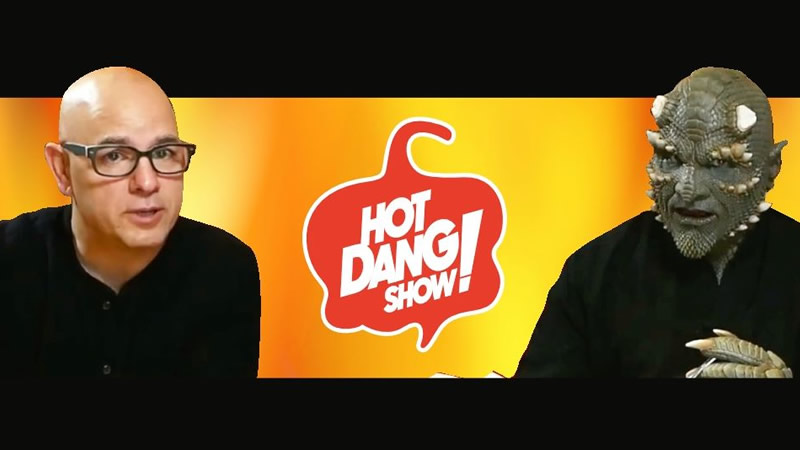 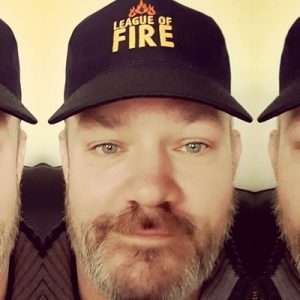 I thought it would be interesting to get to know some of the legends of the League of Fire a little better, so I reached out to Roger Trier, not only Number 4 in the Official League of Fire World Ranking at the time of writing this, but also Host and Producer of the Hot Dang Show on YouTube, to ask him some questions.

Alex: Roger, thank you for taking some time from your busy schedule to have a chat with me. I guess that we should start at the beginning, for me that was when I was about 7 and got invited to my friend’s birthday party at his families Indian Restaurant. What was your first chilli experience?

Roger: I actually don’t remember my “first” chili experience, sometime during my younger years for sure. I’ve always have been fond of spicy food. However, I do recall my first public chili challenge! Pekin Illinois 1995, “Jalapeño Fest 95”. I ate 34 Jalapeño in 15 minutes. I came out in first place and I was miserable afterwards, for 3 days in fact. I would never forget it.

A: Wow! I usually avoid the competitions as raw peppers aren’t something I enjoy that much, but well done on the win there! For me, I enjoy sauces and love going to Expos and Festivals. Is going to those something that you do too?

R: I’ve been to a few Expos. The first was the Chicago Hot Sauce Expo in 2018 where I met Johnny Scoville for the first time. I was projecting to be out at The New York Hot Sauce Expo to help out with Willy Pete’s Chocolate, but the Expo was cancelled due the pandemic. Right at the moment, nothing set up, but I will be around. Nemesis may pop in somewhere.

A: Awesome! Nemesis would be amazing! I can imagine people going crazy if he appeared at a booth! I guess the next question has to be how did you and Nemesis meet? 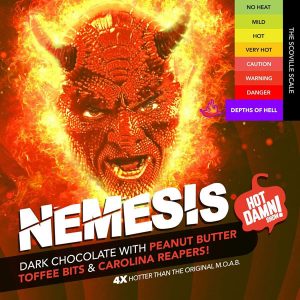 R: At first, I merely want to have a side-kick – with anyone! Everyone is too scared of me, I suppose. Thus, I started out just as my own voice behind the camera. No official name yet. All that changed when I did the chocolate trio video where Bryan Chiarappi from Willy Pete’s Chocolate came into the chat room. I was doing the MOAB, VAT19 Chocolate, and Blum Loco Chocolate. He stated he couldn’t imagine he could make anything hotter for me. I said, “I bet you can!” He reacted with “If you could help me with the design, I’ll make you the damn hot chocolate bar”. This is where Nemesis is born. And, without Nemesis, there wouldn’t be BITES either. Thus, a huge prop to Bryan for making all this happen.

A: It is truly amazing the people that you meet in the chilli world, there are some rock solid, honest to goodness, lovely people. I guess after that segue, my next question has to be about your channel  Hot Dang Show. When did you decide that you wanted to create a YouTube channel, and what was the reasoning behind it?

R: Out of utter boredom. Lol. I’ve suffered for many years, hence why not suffer harder? Being unemployed since 2008 and a stay at home dad. Many years doing freelance design work, haven’t been successful at it, I’ve decided to do something different for once. Put my creativity to employ in my own dang way, and product great video entertainment; Crazy challenges and hot sauce reviews? Sound like a good plan to me! Actually, this is my third YouTube channel attempt. The foremost one is my design portfolio and the second is GET FIT LIFESTYLE where I was doing fitness and nutrition review/advice. I was a “certified” health nut at the time. Too, many FDA rules and regulation so I give that one up.

A: The saying goes, ‘Behind every great man is a great woman.’ My better half, Vikki, enters chilli competitions and I hide behind the sofa when they come up! What does Analyn think about you eating so many spicy things?

R: Oh, she hates it! Says I’m a complete moron, lol. Now she can stop babbling about it. She puts in a great deal of work into HDS, she has responded to just about every comment in every video. My Paqui Chip video has reached 35K comments and is still growing at 4.5M views, she’s responded to most! Now that’s crazy! We will see her again in upcoming videos.

A: Brilliant, I loved the Chilli Oil video where she told you off for having too much! You two are fantastic together, so I look forward to that! She certainly puts a lot of time in to supporting the channel, but I wonder how long it takes you on average to put one of your shows together?

R: In the beginning, it took me almost a week to produce a video. Depending on the complexity. Nowadays, I can whip out a simple video in about 2-3 hours. Still I’m looking to cut corners without quality suffering. That’s merely an editing part!

Every recording I need to move my table around to face the camera (I have a very small studio). Check the lighting, making sure my camera is in focus, do a sound check. This takes me nearly 15 mins of setting up. Straight off the recording section part, I go with the flow…no script. Sometimes I need to do a retake because I didn’t pronounce a word correctly or I’m just not feeling the flow. Not to mention the dog barking in the background, kids running around the house, or sometimes some equipment breaks down. All in all, this could occupy up a half a day to do just one video.

A: Wow! I have a small channel with my wife, but we are very much ‘one and done’ so I don’t really have to spend much time editing, I just upload and I’m finished. Obviously, there is a massive difference with the quality when you spend so much time editing and adding effects, what drives your passion for production quality?

R: I was motivated by most YouTube tech reviewers such as Armando Ferreira, Marques Brownlee and Unbox Therapy. Top notch! I just love gadgets! A little James Bond in me. Not to mention, a huge motivation is Good Mystical Morning. I love their studio setup. This is why my background looks a tad familiar. As for production quality, It is extremely difficult for a single person to produce the quality of the production I’m putting out. Content is easy, quality is not. For me, I’ve found by switching on a camera and do a talking head is tiring. Being entertaining is exciting and immersive.

Tell me, would you want to watch Star Wars on stage play or go to the iMax Theatre, hmm. If I had a team, I could easily produce more videos each week, effortlessly. This is also why I’m pushing for more subscribers and viewers for ad revenue and selling merch on the side, so in the future I could hire some help. Look, I’m being real here. It’s all fun but at the end of day, we all need to put food on the table. Being a YouTuber is not easy. Now, I need to work on my personality, I felt a little dry at times.

A: Well, I think that you are hugely entertaining, us Brits love dry humour! I love your take on things, the raised eyebrow, the silent look to camera 2 then look back to camera 1. Very entertaining. It must be difficult though, with constant production, to keep it fresh. What gives you new ideas for content?

R: Totally random and in the moment. I don’t like to force think. But, if you waited too long when a new product comes out, the trend fades. Need to be on your toes. I sort of visualize the “story” in my mind, but only a few were scripted and found it’s not the best way to execute it. I like surprises and a workaround.

A: Where do you see you and the Hot Dang Show channel going in the future?

R: Gosh, I have no clue, that’s a beauty of it. Ideally, to become a full time YouTuber someday… but getting close. Would like to do more collaborations, more crazy challenges, and JUST TO HAVE FUN!

A: I have to ask this; his fans will shout at me if I don’t! Will Nemesis ever get his own show?

R: I tell you what, let’s focus on HOT DANG SHOW to see where it takes us in a year or so. Then we can talk about the future for Nemesis own YouTube channel. Right now, I need him as a silly sidekick.

Sharing the Burn on Video